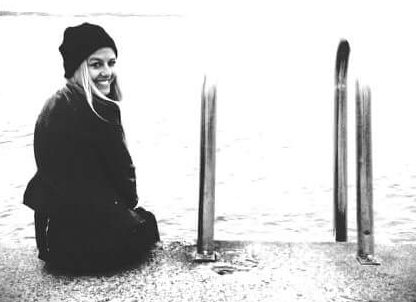 To give you a short abstract about my life you have to know I am Resi, born in 1987 in a small city in Thuringia, which is a region in the middle of Germany famous for forest and sausages. Thinking about my hometown means an awesome childhood for me. I grow up with an older sister, a pool in the garden, many friends around and a little private zoo.  In summerdays I spent my time outside in the beautiful nature just behind our house, playing with friends. During wintertime I invented board games, played the piano or wrote funny stories. The all time favourite of my stories is by far “Die lachende Banane Franz” (the laughing banana Franz), published exactly twenty years ago in September 1996. As it is written on the cover, I finnished the 2-days-writing-process shortly before I turned sweet little nine years old. I don’t want to withhold you the extraordinary storyline.

The main character is a banana called Franz, who can’t stop laughing. I called it the laughing disease. Franz’ neighbour Misses Meier was really annoyed by the noise and pushed Franz to see a doctor. As it’s often like that, the doctor couldn’t help. Even Franz’ great-granddad, who was 99 years old and a doctor as well (not practicing since 50 years of course) couldn’t help. Years passed by. One day a wise crab heard of Franz’ little problem and came around with the answer. There’s no other way than a kiss between Misses Meier and Franz. Misses Meier wasn’t amused but wanted to help, espacially to have her own inner peace. The crab was right, Franz stopped laughing immediately. The only problem was, now Misses Meier was the one, who started laughing and never stopped it again. Fortunately they met a man short time after, who wanted to get infected by the laughing disease – or just would do anything for a kiss from pretty Misses Meier, who know’s – and solved they problem with a single kiss. It was the beginning of a deep friendship between Franz and Misses Meier. They even went on vacations in Spain together and spotted a mermaid in the sea! As best friends in the entire world they lived happily ever after. The end.

when life wants a decision

When time arrived to make a decision after my final examination I was thinking between studying pharmacy (I like(d) chemnistry) or something creative with media (I like reading and writing). I chose the second option still not knowing why even today. It was a feeling and so I did it. I studied in good old ancient Weimar and had just a perfect time. Besides a solid teaching in the media field I met wonderful people and made lifetime-friendships, I’m pretty sure. After I finnished my studies, life was asking again for a decision. This time I decided to travel before starting the real life. This decision brought me in total six months to Australia, Southeastasia, India, the Middle East and Ethiopia in Africa. There’s not much else to learn something about life than travelling. The memories you collect last forever, in either ways. So everyone, who is still thinking about should I and all these silly questions: Do it now!

Back in reality I was looking for my first real job and ended up working for a Berlin newspaper. Since three years I’m living in Prenzlauer Berg, the Berlin district famous for young families with fairtrade clothes and Swabians sipping latte macchito with soy milk at Kollwitzplatz – mostly both mixed up. It’s a Berlin thing to characterise your district all the time and circumvent it from the others with remarkable attributes. So I’m game! Mitte is for hipsters and fancy startups, Kreuzberg is for partying in the best clubs, Neukölln is for expats and an interesting mix between arabs and turks and so on. After accepting every trip in between the city takes you more or less 30 minutes of your precious time, I felt in love with this special capital. In case you are like me always up for trying new things such as restaurants, bars, sport activities, concerts from unknown artist and all this stuff Berlin treats you very well. This city allows you to discover something new every day.

a blog idea was born

That’s how the idea for my blog was born. I realized, I’m testing new stuff nearly every day. Espacially trying new restaurants and bars, doing new cultural or sport activites and travelling the world are my favourite freetime activities. Two weeks before my 29th birthday I had the idea to turn it into a game. I’ll try to do something new every day for one year. It’s my year of 365 first times. To avoid stress and just beeing realistic my definition of a first time is a soft one. There will be days when a new thing means only seeing something from a new angle of view, like a small detail in your everyday life. Most of my first times will be categorized in food, drink and culture. I would love to post more about travelling, unfortunately work doesn’t allow me to do so. Just a few posts will be categorized to style, just because I don’t see myself as a fashion blogger. But yeah, I’m a girl, sometimes I buy a beautiful new dress or something decorative for my apartment and if it’s enough to write at least three sentences about it, I’ll feed this categorie. If I meet new people and they’re willing to get portraited I arranged the categorie people. Highlife is the categorie for my poshy life and all the first times, who don’t fit with another one. My first first time for example.

excuse me, i’m not a professional

As you already perceived I guess, I’m not a professional. Neither in writing english blog posts nor in taking perfect pictures or handling word press in all his subleties. All I do is giving my best and having fun with writing about my experiences and amateurish picuture editing. Above all it’s an experiment. A post every day sounds like much work. Excuse these days, when posts are short and pictures shitty. My focused concern is to have a great year before turning 30, which doesn’t mean end time mood arrived, just having the awareness a big number is waiting. Let’s share these 365 first times together!